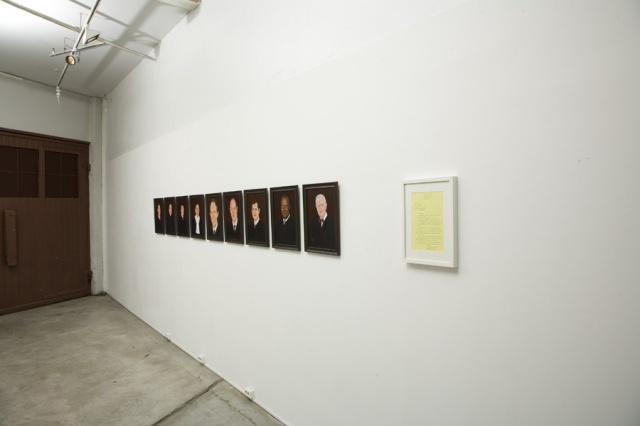 Like a Dog! is the last uttering of the protagonist Josef K, before his execution in Franz Kafka’s novel The Trial. Kafka’s ending is about as intangible as the rest of the novel. This however has not prevented the book from becoming a commonly-used and popularised reference and thereby escaping the authorative position often associated with literary classics. The book deals with K’s fight against an impenetrable bureaucracy, and has been the source of countless adaptations and interpretations. In the exhibition Like a Dog! Per-Oskar Leu adresses the proliferation and reuse of similar culturally ”decoded” phenomena, but with an equal interest in the Kafka-mythology itself.

Central to the exhibition is the reconstruction of The Courtroom from Orson Welles’ screen adaption of The Trial from 1962, originally shot inside the disused train station Gare d´Orsay in Paris. In Leu’s version The Court has been constructed using surplus material from the new Central Detention Center in Oslo. Leading from The Courtroom, which has been furnished with chairs from a previous German asylum center, is a connecting strand to another part of the exhibition. Worker migration from Eastern Europe has been discussed in Norway since the expansion of the European Union´s border policies. Leu hired Polish actors to play the role of construction workers and filmed them while building The Courtroom at UKS. By using an illegal workforce, the project points at Norsk Kulturråd’s (The Norwegian Art Council) role as a governmental guarantor and support provider for the exhibition.

Another central reference to Kafka’s novel are the paintings of the nine members of The US Supreme Court hanging in UKS’s reception, commissioned by Leu from an US prison inmate. In The Trial, the painter Titorelli occupies a special position in relation to the court’s proceedings; forced to live most of his life inside a slatted cage with a backdoor opening directly into the chancelleries of the court, painting virtually nothing but portraits of the judges, he is the only person able to shape their decisions. Titorelli thus becomes a type of tragicomic but still poetic metaphor for the artist’s influence upon the Law. THE COURTROOM SESSIONS

A seminar program in conjunction with Per-Oskar Leu´s exhibition Like a Dog!