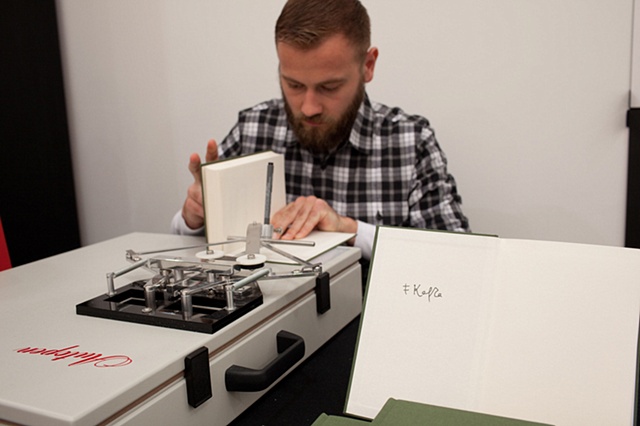 The Bachelor Machine
< previous next >

For The Bachelor Machine, Per-Oskar Leu arranged an impossible event at the fair - a book signing by Franz Kafka, 85 years after his death. Since none of Kafka’s novels were published during his lifetime, this book signing was his first. Using autopen technology and facsimile first editions, the project is both a humorous commentary on trade fairs in general and a complex set of links between sinister machines – the sentencing / punitive machine in Kafka’s In the Penal Colony, Duchamp’s Bachelor Machine and the innocuous yet deceptive Autopen itself, recently used by Donald Rumsfeld to sign letters to the families of US soldiers killed in combat.

The signing took place in the Koenig Bookshop, where copies of The Trial were be available as a reproduction of the 1925 German first edition at the publisher’s current retail price of 12 Pounds.

There is an anthropological aspect to the work of Per-Oskar Leu that blurs the boundaries between artifact and artwork. Bringing an object's history to the fore, Leu unleashes past narratives from that original context and presents us with an opportunity for new readings and reinterpretation. At the Koenig Bookshop at Frieze Art Fair, Leu stages a posthumous book signing of The Trial by Franz Kafka, 85 years after Kafka's death. Using autopen technology, this is the first ever signing by the author who died two years before the book was first published. Limited in edition only by the number of copies sold at the fair, the book is a true reproduction of the 1925 German first edition and is on sale at the publisher's current retail price of 12 Pounds.

Patented in 1803, the autopen is a robotic signature device that was developed in America for travelling politicians to notarise documents while abroad. Recently, the autopen was brought back into public attention after it was reported that Donald Rumsfeld was using the technology to sign condolance letters to families of fallen US soldiers. As The Bachelor Machine outsources the signature, it not only undermines the value of the authenticating act, but also makes a rather sinister comment on how value is often produced in works of art.