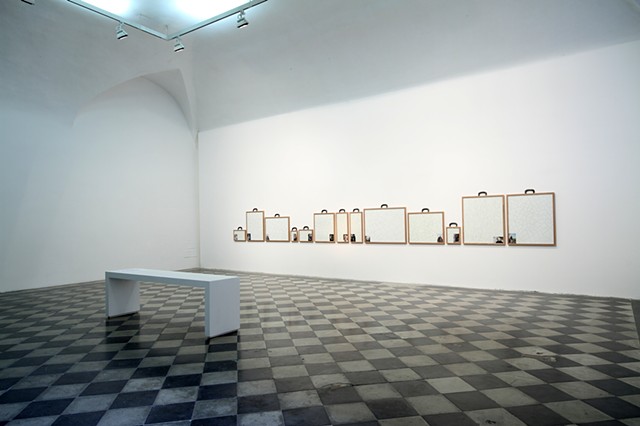 Biography of Painter and Sculptor Otto Freundlich*, Authored by Himself

I was born on June 10th 1878 in Stolp (Pomerania). As a child I used to draw a lot, but upon starting school the talent disappeared. I became a merchants apprentice, and then a clerk, but after abandoning this occupation, I began studying art history in Munich. While being an art history student in Florence, I took up sculpture and painting. I was then twenty-seven years old. After two years of independent practice, I developed a style of painting applying colorful, clear, and purely constructive surfaces, without any naturalistic or impressionistic elements, a technique to which I have remained faithful since 1908. My first abstract pictures date from the year 1911. In 1908 I created various sculptures: a male mask (bronze); a female bust (bronze); in 1910 a mask made of plaster. All these sculptures are placed in private collections.

In 1908 I came to Paris for the first time. I found a studio in Montmartre (the Bateau Lavoir), in the same atelier building where Picasso then lived. I exhibited my pictures at Galerie Sagot on Rue Laffitte. At the invitation of ›Kunst-Kring‹ in Amsterdam, I participated in an exhibition there, together with all the Parisian avant-garde artists in 1912. In 1912 I also exhibited at the Cologne ›Sonderbund‹, and that same year I made two large heads of plaster. In 1918-19 I created a 2x3 meter mosaic for a private collection, and in 1924 a church window. I regularly exhibited with the Berlin-based ›Novembergruppe‹. After returning to Paris in 1924, I took part in the Salons of the ›Indépendants‹ and the ›Musicalistes‹, and abroad I participated in exhibitions at museums in Amsterdam, Den Haag, Zürich, Basel; in London: Guggenheim Gallery and Burlington Gallery. On the occasion of my sixtieth birthday in 1938, the picture ›Triptychon‹ was signed over from Jeanne Bucher in Paris to the Jeu de Paume Museum. In 1929 my first monumental and non-figurative sculpture arose, in 1933 another non-figurative and monumental sculpture in plaster, and in 1934 an architectural sculpture, which followed the execution of an architectural relief. In 1938 I realized a (three-part) mosaic ›Hommage au peuple de couleur‹. From 1932 to 1934, I participated in the exhibitions and publications of ›Abstraction-Création‹.

Publications: Genius (Sculptures, 1910), and in 1919, a portfolio with eight engravings (Kairos Verlag). Kunstblatt: 1931. Contributor to ›A–Z‹ in Cologne and to ›Die Aktion‹. In Germany, the sculptures of mine that were previously in the museum of Hamburg, have been displayed at the exhibition ›Entartete Kunst‹ (1937-1938) in Berlin and Munich, and depicted in the ›Stürmer‹. My studio ›Le Mur‹ (Academy of Art) is situated in Rue Henri-Barbusse 38 in Paris, (formerly Rue Denfert-Rochereau), I had to leave it twice, in 1939 and in 1940, as I was interned.